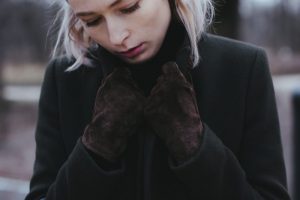 ‘My review is coming up and I have no idea how I will fare,’ Brenda* worried out loud. She hated not knowing because if it was bad enough she could lose her job. She explained how a few people at her level had been laid off. Then again, she argued how qualified she was even if good positions were hard to find.

Brenda continued contemplating her marketable skills, the economy, the stability of her husband’s job and their expenses. She hoped a thorough examination would uncover convincing evidence that her anxiety was unfounded. When asked what the worst case scenario would be Brenda laughed without humor. “When it comes down to it, I am afraid I will end up homeless and alone.”

Brenda has a loving husband, a devoted daughter and an enviable list of close friends on speed dial not to mention enough savings to warrant a financial advisor. While anyone could end up homeless and alone, Brenda has allowed her anxiety narrative to run too much of her life.

Your personal anxiety narrative is a story or layers of stories that justify your need to worry.  They also distract you from the core fears you have. The same fears, by the way, shared by every other person on the planet. Those inherent, unsupportable horrors that somehow you are unlovable, unworthy or are guilty of something that warrants cosmic punishment.

Brenda’s bottom line terror is she is unlovable. If she cannot hold on to her job, she will not deserve regard. Obsessing on her professional woes is easier than facing the rawer, ‘what if I am worthless?’ The anxiety narrative leads her down the if-I-fix-something-outside-myself-the-anxiety-will-go-away rabbit hole.  It is the job, my finances, my health or the nutty people leading the country causing me to panic. Right? In the meantime, the cycle of worry rolls along because the real source of anxiety is never addressed.

If she examines her narrative, she will find all sorts of flaws in her thinking. Brenda sees life on the streets as the ultimate punishment for poor job performance. While people do end up homeless after a lost job, the chances of this happening to her are miniscule. Which begs the question, does she believe everyone living on the street is being punished?

She may see life’s afflictions as punishment because many people secretly do. It is easier to look at suffering and believe the sufferers did something to create that fine mess then to accept that bad things can happen no matter how we behave.  Brenda cannot judge others without those same beliefs condemning herself.

The more insidious unexamined belief is that she has to do something to earn love. Respect from other people requires effort but love is not earnable any more than she could earn a sunset or a rainbow. Her energetic nature is love. Love connects her to everybody so there is no external action to take. She could behave in ways that are more in alignment with the love she already is but first she must recognize it as her true nature.  Kinder actions may make Brenda temporarily happier but to manage her anxiety permanently she must remember her love heritage.

Next time: Mining Your Narrative

*Not her real name.