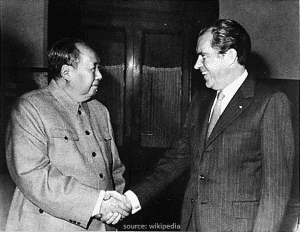 I (and many other commentators) out there have written about the Saturn-Neptune Square happening now, and how it is the source of many problems and obstacles and generally seems to be making a lot of things collapse. Saturn square Neptune naturally represents a time when hard work and order clash with belief and delusion, and neither side wins. This has a lot of truth to it, but I’ve come to the conclusion that it’s simply a matter of “Immovable object meets irresistible force, and no one wins” is overly simplistic. Any aspect, even one as troublesome as the square, represents a blending of two planetary energies. Sometimes that blend may not be any fun, but it’s still something that must be addressed… and with a little skill you can even make progress with it.

Consider the biggest political event of early 1972: the historic meeting between American President Richard M. Nixon and Chinese leader Mao Zedong, which happened during a Saturn-Neptune opposition… in fact, it began the day Saturn entered Gemini, the Sign opposite where Saturn is now. Both leaders were in some ways wildly successful, yet both had a huge body count. Yet somehow, some good came of the meeting between these two.

Warning: this video contains exactly one bad word, spoken in both Hunan Chinese and English. Nonetheless, it stands as a good example of the clash between Saturn and Neptune, both inwardly and outwardly. I can’t vouch for the absolute historical accuracy of the dialog, but if there’s one thing Neptune knows, it’s that a good story can tell you more truth than verified facts alone can.

“The real war is in us. History is a symptom of our disease.”

It’s hard to imagine two political leaders more Saturnian than Nixon and Mao. Both were Capricorns, both were strict authoritarians, and neither one appreciated dissent. Yet at the same time, the Neptunian qualities of idealism (and self-delusion) were there too. Although President Nixon was often inscrutable even to those closest to him, none doubted his desire to gain power and to be remembered well by history… even though his name is still synonymous with “lying and dishonor.” Chairman Mao claims to have been motivated by a great love for his country and people… despite being responsible for the deaths of many millions of them. Saturn rules discipline… and brute force. Neptune rules high-mindedness… and self-delusion.

In 1972 The United States was at indirect war with Communism in general, and China specifically, by attacking Vietnam. The Vietnam War wasn’t being particularly “won” by the United States, despite pouring a lot of bombs and blood and money into the matter. Nixon went to China seeking, among other things, a peaceful resolution to the matter. He came away with nothing new regarding Vietnam, but managed to open relations with China and further drive a wedge between China and the Soviet Union, thus helping to make one huge headache for America into two smaller and more manageable headaches. In turn, China got reduced tensions around Taiwan and a foot in the door to a future massive customer.

So, in many ways you could consider Nixon’s trip to visit his implacable foe a success, politically and otherwise. This of course didn’t end the Vietnam war (in fact Nixon only intensified the attacks, eventually dropping more tons of explosives on Vietnam than America dropped on Europe during World War Two… except without winning. Mao got a lot out of the deal too, although it didn’t stop him from killing a lot more of his own people before his death in 1976.

If you want to get anywhere in life, you need both the self-discipline of Saturn and the power of belief that comes from Neptune. You’d better get busy with that, because you know the future Nixons and Maos of the world are already hard at work on it. And you had better not use a difficult Saturn-Neptune aspect to keep you from it, because if even people like Richard Nixon and Mao Zedong can get some good out of it, why can’t we?

read next post
Blaine Gabbert: Astrology Of A Bad Press Conference
archives most recent
More from Beliefnet and our partners
previous posts