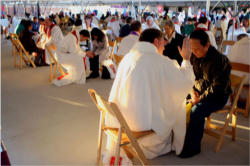 The children are fighting. I decide to wade into the fray and break things up. As soon as I ask what is going on each child points to the other and they say in unison, ‘He started it!’ It’s part of our wounded human nature to blame somebody else for our problems. The Garden of Eden story makes the point all too painfully: As soon as God finds Adam and Eve and questions them Adam says, ‘The woman told me to eat.’ Then when God looks to Eve she immediately blames the serpent.

Blaming others for our problems is a natural response, but it is also an immature response. Our natural responses are usually childish. We have to learn mature behaviour. However, the immature response of blaming others doesn’t always look childish. Sophisticated adults use all sorts of tricks to shift the blame. When a business fails managers blame employees, employees blame managers and everybody blames the executives.

Even when politicians and religious leaders fall they blame conspiracy theories or political enemies. Some forms of counselling encourage us to blame our parents for the state we’re in. Social theories blame our social environment or our financial background. Other forms of self-analysis teach us to blame our education or our lack of education, our religion or our lack of religion. Almost anything can be used as a root reason for our problems.

Many of our problems do have roots in all these areas, but healing doesn’t come through attaching blame elsewhere. True healing comes through owning the problem. Secular self-help programmes are good at helping people own their problems and decide to do something about it, but one of their failings is that they give the impression that we can do something about our failures and problems on our own. If only we have a little bit more will power and positive thinking we can overcome anything. Sadly most of us can’t. We need outside input.

The mature person realises his problems are his own, and that there are only two people who can really do anything about it. The first person is myself and the second person is Jesus Christ. As a result, the best therapy and the best problem solving technique is to learn how to say ‘sorry’ at a very profound level.

When we bring the things we have done into confession we are taking a huge first step away from the immature behaviour of blaming others. In confession we cannot blame anyone else. We own our faults and bring them to God. It may be true that we commit sins with mixed motives or because of circumstances beyond our control. All of our actions and decisions grow from the complex condition of our heart. God knows and understands all that. Instead of analysing all those other factors He wants us to simply come into his presence with the thing that’s gone wrong and leave the rest to him.

If we hand it over in confession often the other things get themselves sorted out. Confession is like the kind of weed killer which you spray on the leaves of the weed. In time it penetrates into the pores of the leaf, moves down the stem and kills the very root. So when we bring outward sins and problems to confession the grace of absolution moves deeply into our lives, killing off those very roots of sin which some forms of therapy continually analyze and mull over.

Sometimes I forget to bring to confession the things I’ve left undone, but in fact that area of my life is where there is perhaps the greatest sin. The things we have left undone are symbols of all that we could be in God’s final plan. If we can only get a glimpse of the glory for which we were created, then we would also get a glimpse of how far short of that glory we fall. We were created to be the infinite sons and daughters of the King of Glory, brothers and sisters with the saints and co-heirs with Christ himself. God intends for us to be perfectly whole one day-shining with the radiance of Christ. As we go to confession we should always remember that great potential God has given each one of us. Then we will see that our lack of love and our lukewarm devotion to God is the greatest problem in our lives.

When I was a minister I remember a man named Steve coming to see me, ‘You are always telling us to forgive others.’ He said, ‘But what if you can’t forgive someone?’

‘My friend Richard was my business partner. He was my best friend. Last year I found out he was not only cheating me out of my half of the business, but he was having an affair with my wife. I hate him and I can’t stop hating him.’

As Steve was talking a verse from the Scripture popped into my mind. ‘Who can forgive sins, but God alone?’ Suddenly I realised that it is impossible for us to forgive someone in our own power.

Therefore when we come to confession we should also bring the things that have been done to us. We don’t bring them blaming the other person, but asking God for the strength to forgive them. In the Lord’s Prayer we say, ‘Forgive us our sins as we forgive those who sin against us.’ But maybe we should also understand that phrase from the Lord’s prayer as meaning ‘forgive us our sins at the same time as we forgive those who sin against us.’ With this in mind we will bring to the confessional the things that have been done to us-whether ages ago by our parents or teachers, or earlier in the day by our boss, our spouse or our family members. Then as we ask confess our sins we can also confess our inability to forgive, and ask God to let His forgiveness flow through us to those who have injured us.

In this way saying ‘sorry’ through the sacrament of reconciliation has a powerful healing effect in our lives. Instead of blaming parents or teachers or circumstances or social factors we own our problems and bring them into God’s presence asking for his help. When we do this the healing is powerful and real. It reaches right back to the roots of our sin. It strengthens us to take up the things we should be doing, and it touches those who have sinned against us.  I remember an old priest saying to me, ‘Confession is a simple, humble and beautiful sacrament. It is far more efficient than psychotherapy. Its quicker and its more painless.’ And then with a twinkle in his eye he added, ‘.and its cheaper too!’

Fr Dwight Longenecker is a married Roman Catholic Priest who was ordained under the pastoral provision for married former Anglican priests. Go to his website and connect to his popular blog, Standing on My Head.

The Holy Spirit, Me and the Church
archives most recent
More from Beliefnet and our partners
previous posts

Thank you for visiting More Christianity. This blog is no longer being updated. Please enjoy the archives. Here are some other blogs you may also enjoy: Faith, Media and Culture Prayer, Plain and Simple Happy Blogging!!!

I was an Anglican priest the summer I met St Therese of Lisieux. I was living in England and had three months free between jobs, so I decided to make a pilgrimage to Jerusalem. I was going to hitch hike and stay in monasteries and religious houses on the way. The first leg of my […]

St Simeon the Stylite   I have never understood the aversion most Christians have to fasting. Say the word ‘fasting’ and you get distasteful and alarmed expressions, as if to say, “Good heavens! That’s rather unnecessarily extremist isn’t it?” One suspects that they think you go in for ‘physical mortifications’ of other kinds like flagellation […]

I always give people the benefit of the doubt. Some of my friends think it is a vice and some think it is a virtue. I hope I’m not being naive, but I really do try to see the best of every idea and every person. In this column More Christianity I’ve tried to share […]