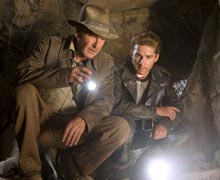 2008, more than any other year in a long time, will be remembered as the year of the movie sequel. I think it’s possible, though, that it should more accurately be described as the year of—are you ready for this?—The Endurance of the Soap Opera! Let me explain.
Indiana Jones (“Indiana Jones and the Kingdom of the Crystal Skull” is due May 22. “Rambo” was out earlier this year and the original (“First Blood”) has a special engagement May 17 in a digitally re-mastered form and will be on DVD shortly thereafter. Batman (“The Dark Night”) re-introduces us to the caped crusader along with a new Joker on July 17. Mulder and Scully also come to the screen in July in “X-files 2.” The Mummy (“Tomb of the Dragon Emperor”) is up August 1. James Bond (“Quantum of Solace”) will show up in November, as will Harry Potter (“Harry Potter and the Half-Blood Prince”). “Star Trek XI” has been moved from a December release to May, 2009.
And of course there are a whole host of others, including “Harold and Kumar Escape From Guantanamo Bay,” “The Incredible Hulk,” “Madagascar II,” “Saw II” and other lesser-known series.

This leads me to wonder why there’s such a strong market for these sequels and re-releases. It used to be that successful sequels were the exception. Sure, “The Godfather, Part II,” “Star Wars: The Empire Strikes Back,” “Rambo: First Blood Part 2,” “Die Hard 2: Die Harder, and “Lethal Weapon II” were all as strong (if not better!) than the originals, but I grew up with really tired and embarrassing clunkers like “The Sting II,” “Smokey and the Bandit II,” “Canonball Run II” and even the “Rocky” sequels, which were just never as good as the originals. Why is it that the current market seems to spawn huge mega-franchises (“Spiderman,” “Lord of the Rings,” a very average “Star Wars” prequel series, etc.) while the previous one did not?
I suggest that it is largely because of two reasons. Younger audiences are growing up on the Internet and have learned the safety of relating to characters that exist on a video screen, T.V. screen, interactive game, or I-device to a much greater degree than any prior generation. And to this new generation, it’s actually safer, from a deeply spiritual and psychological point of view, to relate to characters who we somehow know will never jump off of the screen and hurt us or reject us. They’ll never put pressure on us or boss us around. They offer virtual relationships complete with highs and lows and events and conversations but they don’t bring with them the risk that more complicated (real!) relationships bring. I’m not saying that we ignore people or don’t like to hang out with ’em—I love going to the movies with my bride, my friends, or my kids. But when it comes to the kind of drama, risk, and emotional vulnerability of real relationships, I believe this generation is latching onto movie characters the way a former generation latched onto soap operas! And for that matter, the mature generation to some degree taps into that same vein by going to see movies with characters they already know well, more than brand new flicks which are more original or perhaps have more to say.
There are no absolutes to this, to be sure, but my guess is that at some point in the future there will be psychologists and sociologists who invent a name for what goes on when real people form relationships with on-screen characters and are willing to wait years to pay money to see them again when they won’t wait a half-hour for a family member or friend who is late. But for now, I’m going online to get my tickets to Indy 4; I want to get a good seat for opening night!