Are You a Jesus Poser? Am I?

I spent this weekend in Connecticut with my husband Martin and our son, Ian. It was a short little jaunt, built around the Connecticon Anime Convention, a tribute to Japanese animation, comic arts and video games. This was our second convention with Ian who, like a clear and heavy majority of attendees, was dressed as his favorite anime character (that’s my little Neji from Naruto standing with Pikachu from Pokemon

We have dozens of similar photos of him standing, sitting or posing in fighting stance with others in their teens, 20s and beyond who came together for the event. As we walked the halls of the Hartford Convention Center and interacted with other attendees, two things struck me: First, this event was attended by quirky folks who marched to their own beat. The kind of people who fall prey to insecure cool-guys and mean girls in school cafeterias and gym locker rooms because they look, talk or act a little different. Second, these people were incredibly nice. We encountered hundreds of people directly and indirectly, each one noticeably polite, respectful and helpful to us and to one another.
Moving from table to table in the artist hall and down the long row on tables filled with characters playing video games and stamping out perfect scores on the most challenging settings of Dance Dance Revolution, I began to think: these costumed outliers are incredibly creative and surprisingly real. Listening to their conversations and observing their interactions, they appeared to follow their passion with abandon, accept one another at face value and treat one another with courtesy and respect. Paradoxically, despite striking the poses of the characters they were playing, none of them seemed like  “posers”. What you see is what you get at an anime convention. 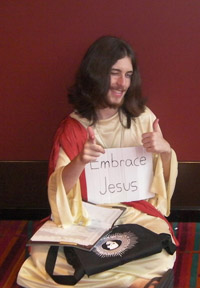 This was especially true for this guy who spent the day playing Jesus. At first I snapped his picture and moved on, interested mainly in the irony of the costume choice in the midst of the fantastical characters chosen by his counterparts. Later I saw him again and was compelled to ask him why he had chosen to play Jesus. The question, of course, could be asked of anyone who chooses to follow Jesus and be transformed into His image – this guy just took the conceptual yoke to a more obvious place.
I half expected to hear a deep and convicted response on either side of the typical Jesus debate – a rabid Christian hoping to reach souls at the conference or an atheist making a statement regarding Christ as fantasy. But, instead, I got an honest and refreshingly authentic answer: “Well,” he told me, “I have the beard and the hair…it just seemed to make sense.”
Begs so many questions about posing and what it really means to look like Jesus inside and out. Then again, an even more fundamental question emerges: “why do you want to look like Jesus?” Why do I?

Does the Protestant Work Ethic Hold Up in the 21st Century

Does the Protestant Work Ethic Hold Up in the 21st Century?

Woke this morning thinking about sacrifice and how infrequently most of us, myself included, actually sacrifice anything of true value to ourselves for God and others. Sure we give money to our favorite charities. But when is the last time we actually parted with money that would have gone to paying our bills or buying […]