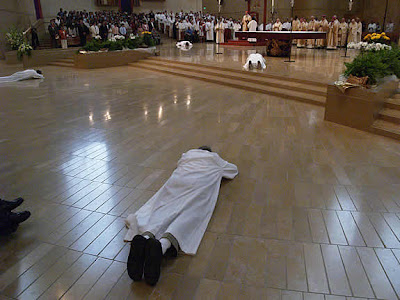 Of the nearly 200 dioceses in America, a handful still do not have formation programs for the permanent diaconate. That’s led to some frustration, disappointment and resentment. Case in point: earlier today, I got an e-mail from a reader in the Midwest. I reprint part of it below with his permission:

Several years ago, I thought about the possibility of becoming a permanent deacon. Several priests I know have suggested that I should pursue that calling. My then-Lutheran wife even supported the idea!

The situation is very frustrating to me. I read numerous Catholic periodicals and some of them feature regular articles about issue related to the ordination of women. Many of these articles are quite lengthy and mention that there is no theological basis for not ordaining women and that, given the drastic decline in the number of ordained ministers, it makes practical sense to ordain women. Some of the same arguments are made for the ordination of married people.

Whether or not you agree with the position, the leadership of the Roman Catholic Church has not approved the ordination of women or married men to the priesthood. That same leadership has approved and supported the restoration of the permanent diaconate. The vast majority of dioceses in the United States actively support and recruit men to serve as permanent deacons. It is very difficult for me to look at every other diocese in my state and see their support for the ministry of the permanent diaconate.

The obvious question is: If I feel such a strong calling to the permanent diaconate, why don’t I move to another diocese? I have given strong consideration to that. However, I feel a sense of obligation to the people of my current diocese, especially the permanent deacons from that single class, to “stick it out” and persevere in efforts to change the attitude of our diocesan leadership towards the ministry of the permanent diaconate. Also, although I may question the level of support that our bishop has for the permanent diaconate, he has his reasons for leading the diocese in the manner that he feels is best for the people of the diocese. Moving to another diocese for the sole purpose of having the opportunity to become a permanent deacon shows a lack of confidence in my current bishop. He is our bishop for a reason that only the Holy Spirit knows. If it is God’s will that I become a permanent deacon, that same Holy Spirit will make that happen in my current diocese or somewhere else.

I’m wondering: are there any deacons or formation directors out there who might have some insight or advice??