“Why Are You So Afraid? Do You Still Have No Faith?”

This last week on Facebook was one of general fear, anxiety, panic and despair, not so much because everyone was in and out of relationships, or because Lucky Slots wasn’t doing well, but because too many Christians are preparing for the imminent invasion of the United States by hostile forces.

The overall message was along the lines of, “We’re ready to die! Except . . . we don’t really want to die.

And the solution, we’re told and Facebook Christians are repeating, is to invade assorted sovereign nations and blow people up, and if women and children (some of them are our Christian brethren) are caught in the crossfire, then that’s too bad, because they shouldn’t be there in the first place.

This hardly seems like an attitude in line with a people who are against abortion because it takes the life of innocent unborn children, but fear does funny things to us, and the folks who traffic in fear know this. Good people, who would not otherwise kick a dog, call out for “forceful measures” overseas — where we don’t see — and because there are few visuals of the damage caused by these measures (not just buildings blown up, but the people who were sitting in the buildings at the time the bomb hit), we are insulated from the results of our call to action.

A People of Peace, and Wisdom

It’s not that there’s nothing to fear — but it’s our reaction to information, and disinformation, and misinformation — that is alarming, and that the people who follow the Prince of Peace are among the first to demand that we release the bombs doesn’t say much about our discernment, wisdom, commitment to truth, and thought.

How accurate is the information that we are receiving? (and as an aside, just because Bill O’Reilly says it’s so, folks, doesn’t necessarily mean that it’s so.) And what is the result of that information — knowledge? confidence? a falling down on our knees before Almighty God and asking what we should do? He is, after all, our King, and the ultimate leader we follow.

In Mark 4:35-41, Jesus and the disciples head across the sea when a furious squall comes up, and the boat is nearly swamped. Jesus, asleep in the stern, is awakened by panicking disciples, saying (shouting, in my mind),

“Teacher, don’t you care if we drown?”

The Wind and Waves of Fear

At this point Jesus arises, rebukes the wind and the waves, and then turns to His disciples and says,

“Why are you so afraid? Do you still have no faith?”

This extremely difficult passage (told also in Matthew 8:23-27 and Luke 8:22-25) always puzzles me because I think,

“Well, what are they supposed to do? There’s a storm, and the boat is sinking and You’re, um, asleep.”

The standard preacher pulpit solution that, “They’re supposed to trust Him because He did, after all, say they were going to the other side,” doesn’t fully cover all the questions. Were they supposed to waken Jesus earlier? Or sit down beside Him until He did so on His own? Or keep bailing water?

Obviously, I’m not the only one wondering, because the copious notes at the bottom, which helpfully inform me “miracles are hard for modern man to accept,” and “The sea of Galilee is particularly susceptible to sudden, violent storms,” completely ignores the, “Do you still have no faith?” part.

We Trust the Wrong Sources

But one thing is clear, the disciples’ question, “don’t you care if we drown?” implies a strong distrust in Christ’s ability to handle this storm, and perhaps may give the insight we need to understand Jesus’ following two questions.

There is much to fear in our world today, but as Christians, we are not to be buffeted about by the waves and winds of media and social media despair, calling for extreme action before we even know what we’re fighting. How many innocent people have been shot, beaten, or tasered to death by insecure police troops who reacted — too forcefully — to feeling “threatened”?

We, too, feel threatened — every time we turn on the news or listen to a political commentator — but why is our first response NOT to run to Jesus, asleep in the stern, and say, “I’m frightened. What would you have me to do?”

I seriously doubt that His response would be, “Bomb ’em. Bomb ’em all.”

“As we fight evil people, some innocents will have to be killed,” we sigh, which sounds uncomfortably like the high priest Caiaphas’s advise to the Jews who were out to kill Jesus, “It is better for you that one man die for the people than that the whole nation perish.” (John 11:50)

That one man did die, and He rose again, and Christians follow Him. As difficult as it is, we must wrestle with Scripture — not change it — and bring our actions, and reactions, into alignment with God’s will.

Thank you for joining me at Commonsense Christianity where all I’m asking Christians to do is stop. Think. Question what we’re told. Stop allowing people to manipulate us.

And don’t give in to fear.

Are We Being Bullied to Think a Certain Way?

Christianity Is Not a Political Party 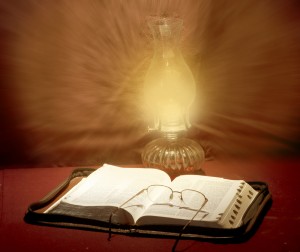