Is God Calling You?

In our church days, when I sat in an interlocking chair, stared ahead at the big white screen, and sang words that flashed by, I used to wonder, vaguely, if God was calling me to do something, and I wasn’t hearing.

After all, the church had all sorts of ministry opportunities. Although many of them I was unqualified for because I hadn’t gone through the newly implemented Leadership Training Classes, there were many mundane options, like coordinating the Interlocking Chair Set Up and Take Down committee (which, for some reason, NOBODY wanted to be involved in).

But I wasn’t interested. Burnt out after years of a Wednesday night children’s program that never could figure out if it was teaching church kids or attracting unchurched ones, I continued to arrive, Sunday mornings, and sing the words in front of my face. I reminded myself that working hard, loving my family, and caring for the people strewn across my path were worthy things to do.

And then God forcefully and unmistakably called me. Actually, He called our entire family, and it involved, initially, a whole bunch of really bad circumstances that were extremely painful to go through. God didn’t cause this pain — but He was there, along with a very few others, to get us through.

Simultaneously, we found ourselves increasingly disengaged with our weekly church experience, and while some would say this is because of our stubbornness to not go along with the program and take those Leadership Training Classes, it’s actually because of those classes — and the change in climate and attitude in the congregation around us — that we eventually left.

We simply couldn’t fit into the new way of thinking, the new insistence upon doing things one rigid, corporate-driven, inflexible way, and one Sunday — it was Easter — it snapped. We realized that we were bored, vulnerable, tired of being pariahs, and finished with fitting in. We weren’t growing, we weren’t deepening our relationship with Christ, and we certainly weren’t interested in the limited options we were given to “serve” Him.

“It’s unusual that God would call you out of a church situation,” someone once told me. “I’ve never heard of that before.”

Neither had we, which is one reason we fought to stay in for so long, compromising our beliefs, giving in where there was no reciprocity, convincing ourselves that a weekly touching of bases — in a highly controlled environment — was fellowship.

The book of Mark, Chapters 7 and 8, contains two incidences of Jesus healing, both of which involve, interestingly, spit, as well as leading the people to be healed . . .  out: Mark 7: 31-37 describes Jesus with a deaf man who could hardly talk, and,

“After he took him aside, away from the crowd, Jesus put his fingers into the man’s ears. Then he spit and touched the man’s tongue. He looked up to heaven and with a deep sigh said to him, ‘Ephphatha!’ (which means, ‘Be opened!'”)

“At this, the mans ears were opened, his tongue was loosened, and he began to speak plainly.”

In Mark 8: 22-26, Jesus “took the blind man by the hand and led him outside the village. When he had spit on the man’s eyes and put his hands on him, Jesus asked, ‘Do you see anything?’

“He looked up and said, ‘I see people; they look like trees walking around.’

“Once more Jesus put his hands on the man’s eyes. Then his eyes were opened; his sight was restored, and he saw everything clearly. Jesus sent him home, saying, ‘Don’t go into the village.'”

In both cases, Jesus took the person to be healed aside: “away from the crowd,” or “outside the village.” The healing process was unusual, very hands on, and — I imagine — not particularly pleasant. But it was effective.

One man’s ears were opened  and he was able to speak plainly; another man received sight, in stages:

“Then will the eyes of the blind be opened and the ears of the deaf unstopped.” (Isaiah 35:5)

As Christians, we tend to assume that the blind/deaf issue is permanently taken care of when we find Christ, and to some extent it is. But there is a very real misconception that, as long as we say we’re Christians and are attending church, that we see and hear, somehow, and that we are awake, but if this were so, there would be no reason for warnings like 1 Thessalonians 5:6:

“So then, let us not be like others, who are asleep, but let us be alert and self-controlled,”

“Devote yourself to prayer, being watchful and thankful.”

It is easy to fall into complacency, mistaking busyness for service, repetition of words for prayer, meetings for fellowship, accepting someone else’s commentary for Bible study. The requirements are rigid but tempting to accept, and too many do.

In my experience, Church People — a more accurate description for many Christians — are asleep, readily accepting what they are told, and quick to jump on, or at, the people we’re instructed to hate: radical Muslims, or the liberal left, or anyone who speaks against Israel (there are, after all, Christian Palestinians)

It’s not all church people, and I’m not advocating that all people leave church, but I am advocating — regardless of where, or how much, or even if, you attend church —  getting very serious about your relationship with Christ, and being willing to follow where He leads you — which may very well be away from the wide, safe road where everyone is singing songs, and lifting hands, and taking notes from the sermon.

(I know, you thought you were on the narrow path already, didn’t you?)

If He is trying to open your ears and yours eyes, so that you can hear and see — and speak — He may very well lead you out of the village.

Thank you for joining me at Commonsense Christianity. Let me stop some of you right now: we’re happy where we are, in our unchurched situation, and while the experience of being pushed out of the church setting was initially painful, we would never undo it.

We also know that there is no such thing as a perfect church body/setting, and we are not looking for one. We interact with fellow believers in whatever manner God presents before us, and we encourage all Christians to remember that we — the saints who believe in Christ — are the church — not a building, not a denomination, and not a weekly service.

Alone But Not Lonely

I’m a Christian But I’m Not Religious

The Misfit Christian (in church, out of church — if you feel like you’re always out of step with the group, stop blaming yourself and say, “Here I am, God.” ) 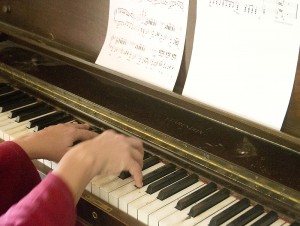 Is Singing in Church the Only Way to Worship?
archives most recent
More from Beliefnet and our partners
previous posts