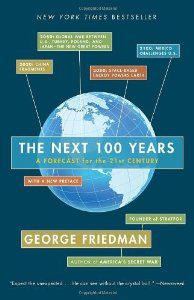 I came across a lengthy excerpt online from the book, “The Next Hundred Years: A Forecast for the 21st Century

” by George Friedman and found it quite insightful.

I say this as someone who probably is indeed an American barbarian by the definition of the passage; I do believe that there do exist uniquely American values and that those values have a universality to them. This is also related to my belief in Islam and why therefore I do see America as an ideal environment for the expression of Islam.

The three-phase cycle of barbarism, civilization and decadence described below also seems like a theoretical to me. I can’t think of any specific examples of this cycle in history, at least not without sufficient qualifiers to render the generalization useless. However, I think it does have value in describing the evolution of political thought within a civilization.

Let’s get to the the actual passage before I comment further:

“For the short term, however – by that I mean the next hundred years – I will argue that the United States’ power is so extraordinarily overwhelming, and so deeply rooted in economic, technological, and cultural realities, that the country will continue to surge through the twenty-first century, buffeted though it will by wars and crises.

This isn’t incompatible with self-doubt. Psychologically, the United States is a bizarre mixture of overconfidence and insecurity. Interestingly, this is the precise description of the adolescent mind, and that is exactly the American condition in the twenty-first century. The worlds leading power is having an extended identity crisis, complete with incredible new strength and irrational mood swings. Historically, the united States is an extraordinary young and therefore immature society. So at this time we should expect nothing less from America than bravado and despair. How else would a adolescent feel about itself and the place in the world?

But if we think of the United States as an adolescent, early in its overall history, then we also know that, regardless of self image, adulthood lies ahead. Adults tend to be more stable and more powerful than adolescents. Therefore it is logical to conclude that America is in the earliest of phases of its power. It is not fully civilized. America like Europe in the sixteenth century is still barbaric ( a description, not a moral judgment). Its culture is unformed. Its will is powerful. Its emotions drive it in different and contradictory directions.

Cultures lives in three states. The first state is barbarism. Barbarians believe that the customs of their village are the laws of nature and that anyone who doesn’t live the way the live is beneath contempt and requiring redemption and destruction. The third state is decadence. Decadents cynically believe that nothing is better than anything else. If they hold anyone in contempt, it is those that believe in anything. Nothing is worth fighting for.

Civilization is the second and most rare state. Civilized people are able to balance two contradictory thoughts in their minds. They believe that there are truths and that their cultures approximate those truths. At the same time, they hold open their mind the possibility that they are in error. The combination of belief and skepticism is inherently unstable. Cultures pass through barbarism, to civilization to decadence, as skepticism undermines self-certainty. Civilized people fight selectively but effectively. Obviously all cultures contain people that are barbaric, civilized, or decadent, but each culture is dominated at different times by one principle.

Europe was barbaric in the sixteenth century, as self-certainty of Christianity fueled the first conquests. Europe passed into civilization in the eighteenth and nineteenth century and then collapsed into decadence in the twentieth century. The United States is just beginning its cultural and historic journey. Until now it has not been sufficiently coherent to have a definite culture. As it becomes the center of gravity of the world, it is developing that culture, which is inevitably barbaric. America is a place where the right wing despises Muslims for their faith and the left wing despises them for their treatment of women. Such seemingly different perspectives are tied together in a certainty that their own values are self-evidently best. And as all barbaric cultures, Americans are ready to fight for their self-evident truths.

This is not meant as a criticism, any more than an adolescent can be criticized for being and adolescent. It is necessary and inevitable state of development. But the United States is a young culture and as such clumsy, direct, at times brutal, and frequently torn by deep internal dissension – its dissidents being united only in the certainty that their values are best. The United States is all these things, but as Europe in the sixteenth century, the United States will, for all its apparent bumbling, be remarkably effective.”

Frankly, I disagree that America as a whole entity is “barbaric”, however American politics certainly does fit the description. Those politics do inform and influence our foreign policy which is also unequivocally barbaric, especially when compared to the idealized foreign policy of a fictional civilization like the Federation in Star Trek:

More important, perhaps, than these dollops of diversity, is the very nature of Kirk’s five-year mission: “To explore strange new worlds, to seek out new life and new civilizations, to boldly go where no man has gone before.” The line is so famous today as to be a cliché, but it’s striking when you take a second to really think about it. The Federation, which our beloved crew serves, is engaged in something like a cold war with the Klingon Empire. But its premiere starship is not a military vessel and has no sharply defined political agenda. Kirk establishes diplomatic relations with new species and tries to play a constructive role in the galaxy, but he’s not there to open new markets to Federation goods or to assist one side or another in proxy wars. The “American values” that triumph in the Star Trek universe are the values that united liberals before the Tet Offensive and the riots in American cities and assassinations and Watergate. And though the message of peace, progress, and tolerance may seem corny today, I happen to think those are still good ideas.

Star Trek was a uniquely American show and the values espoused by the Federation are firmly grounded in American values. That idealism is something that can’t exist in a “barbaric” society.