Map of mosque controversies in the US

Note: I am going to make a conscious effort to stop using the word “mosque” in my writing from here on out. Few people realize that the word mosque is not an Arabic term but probably has colonial – and perjorative – origins. The actual word for a muslim place of worship is masjid, which is a cognate of the root word in Arabic for “prostration” (sajd). And it’s the word I intend to use faithfully from now on as much as possible.

The Pew Forum has released an extremely useful infographic – a map of all the masjid projects facing controversies in the US, with an overview of the details as you click each one. The map accompanies a Department of Justice report released on September 22nd on discrimination against masjids, synagogues, and other places of worship since 2000.

This map shows the locations of 35 proposed mosques and Islamic centers that have encountered community resistance in the last two years. Click on a location for a brief overview of the project based on news reports. In many cases, the opposition has centered on neighbors’ concerns about traffic, noise, parking and property values – the same objections that often greet churches and other houses of worship as well as commercial construction projects. In some communities, however, opponents of mosques also have cited fears about Islam, sharia law and terrorism.

While the map shows only projects that have met resistance, many mosques and Islamic centers have been built in recent years with little or no opposition. See, for example, articles in the Louisville Courier-Journal and the Associated Press about newly opened mosques in Kentucky and Pennsylvania.

Here’s a static screenshot of the map, but do visit the original which provides dynamic text as you click each dot for a briefing on the specific case. 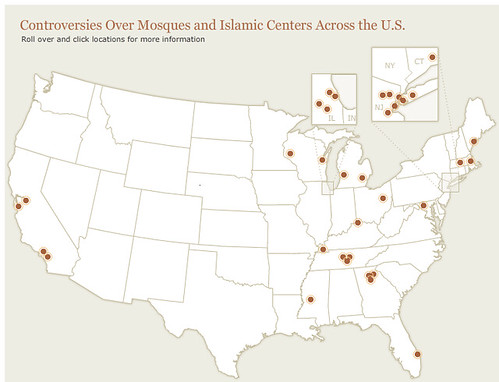 One interesting factoid with the map is that in 2000, there were 1200 masjids in the United States. In 2010, there are 1900 – meaning that the rate of growth is only around 6% per year. This is just further rebuttal to the absurd idea (being promoted for financial gain by intelletcual frauds like Newt Gingrich, Andrew McCarthy, and the authors of the “Team B” report) that there is any impending threat of Shari’a takeover in the United States.

Incidentally, Pew released an absolutely superb report earlier this month, titled “Muslim networks and movements in Western Europe” which is an absolute must-read. It’s incredibly detailed, informative, and useful as a source of real facts to counter the manufactured nonsense by the Eurabia crowd such as Bat Ye’or and Geert Wilders keep trying to sell (literally).

And, as long as we are debunking “Muslim takeover/imposing Shari’a” hysteria in the US and Europe, let’s also take special note of the article at Foreign Policy about the Muslim Brotherhood, which concludes “there is every reason to be interested in the Brotherhood’s myriad (and surprisingly diverse) country branches, but there’s no reason to fear it as a menacing global web.” Also see follow-up comments by Matt Duss, who observes:

Are there also radical Muslims in America right now trying to find ways to turn the U.S. into a religious state? Most likely, yes, and we should be on guard against it. It’s worth noting, however, that the Christian Right has failed at this for decades, in a country where over 75% of people identify as Christian. So good luck with that, radical Muslims.

To summarize: only 6% growth in mosque construction in the US for ten years. No impending Shari’a threat of takeover in the US or in Europe, and the worldwide bogeyman of the Muslim Brotherhood is not so much bogeyman as it is worldwide. So naturally, we spent a trillion dollars in Iraq to “clear the swamp” and now another trillion in Afghanistan, while China massively invests in electric cars, high speed rail, stem cell genetics, and ultramodern airports.