Cicero– A Biography by Anthony Everitt 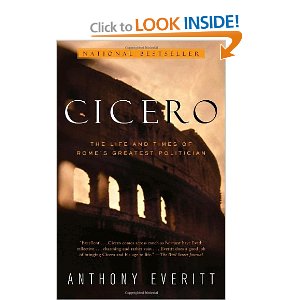 Producing the first biography of Cicero in more than a quarter century, this well written, well reviewed biography (see Amazon reviews) first appeared in 2001 and has continued to be well-received and widely read.  Everitt went on to write similar biographies of Augustus and most recently Hardrian.  Everitt knows his primary sources, and sites them frequently (see his notes),  and there is no reason to quibble with most of his judgments which are fair and balanced.   My interest in this biography is not merely because it gives you an excellent feel for the Greco-Roman world leading up to the NT era, but helps one understand the rulers of that world, increasingly the Romans.

There can be little debate that Cicero was the greatest rhetorician and politician of his age (he died in A.D. 43, on the cusp of the rise of the Empire through the efforts of Octavian).  What he demonstrates over and over again is the power of the spoken word in an oral culture, and therefore equally, the power of formal rhetoric as the means of persuasion in that era.   For those unwise enough to think that oration was merely about eloquence or funerals, and not about politics or real politik, the life of Cicero will quickly disabuse one of such notions.  But there is much for, for Cicero reveals as well the intertwining of politics, religion, and rhetoric, a combination of great importance to the understanding the burgeoning Christian movement, increasingly converting Gentiles in the first century A.D. and all under the shadow and the rather ample Roman noses of Emperors and there governors and proconsuls.  But there is still more because Cicero used rhetoric to advance key philosophical and ethical ideals he shared, and indeed he believed that a good education in rhetoric and literature was an essential part of a moral education which produced such virtues as fortitude, justice, prudence, and one of Cicero’s personal favorites— being a reconciler of those at odds with one another.  Indeed, it was Cicero who coined the phrase ‘Reconciliation is a sign of greatness’,  a quote St. Paul himself could have coined and endorsed.

To me one of the most fascinating points about Cicero is that he was a New Man, that is an outsider, an upstart from Arpinum, who rose to the top of the Roman cursus honorum through dint of sheer personal brilliance and hard work,  chiefly through his oratorical skills.  What his life proves over and over again, for he was not really a military man, and hardly ever led any military excursions, is that one could reach the pinnacle of one’s society through rhetorical talent alone, that and a certain amount of good personal judgment and hard work. Cicero is a constant reminder that students of the NT prone to avoid the rhetorical study of the NT do so at their peril, as rhetoric was at the heart of all ancient education, and the writers of the NT were indeed educated, literate, and in some cases, eloquent.

A further fascinating line of discussion in this biography is the rise of public libraries and the publishing enterprise during the Empire period. I will say more about this in a later review of William A. Johnson’s fascinating monograph— Readers and Reading Culture in the High Roman Empire, but suffice it to say here, that NT scholars need to give far more thought to how the earliest Christian documents were not merely copied, but distributed— by whom, where, and when. If one studies a figure like Titus Pomponius, an acquaintance of Cicero (see p.43) who collected a large skillful staff of copiests in his mansion and became both a noted scholar and a successful publisher of note as well.  It was Julius Caesar, no less who founded the first public library in Rome in the 40s(p. 178), a sign of the increasing literacy of many Romans.

If this were not enough, there are of course lessons to be learned from the example of Tiro, Cicero’s famous scribe, who developed his own method of shorthand with numerous abbreviations we still use today  (etc.  N.B., e.g  i.e. and so on).   Why is this important?  What it means is that before the time any NT documents were written there was an established practice of ‘fast writing’  where a scribe could take down, virtually verbatim, everything an orator said.  Granted, the Tiros of the world were rare, but they did exist and were in increasing demand during the rise of the Empire. It would be very surprising indeed if the early Christians did not employ such people to take down, for example the speeches of Peter, and in fact, we are told by Papias himself that Mark was the one who took down Peter’s Aramaic speeches and translated them into decent Greek. What if Luke was a person like Tiro, going around and interviewing eyewitnesses and original preachers of the Word (Lk. 1.1-4) and taking everything down?   If he did, then it is farewell to old school Form Criticism with its belief in a long gestation of oral tradition before things showed up in the Gospel form.

Another of the insights one gains from studying Cicero is that there was Asiatic rhetoric and there was Atticizing rhetoric, and the former was more popular. A good rhetorician could vary his style with the audience he addressed. So for example,  Ephesians reflects rather clearly the more florid, verbose, long-sentenced Asiatic style of rhetoric, and it stands in marked contrast to some of the rhetoric Paul uses in, say Romans, and earlier document.

Cicero was a man of high moral principle, at least most of his life, and in his important study De Oratore he sets out his view on a proper education for politicians and rhetoricians like himself. “What Cicero had in mind was a justification of rhetoric not as a technique but as an approach to the morally good life, a means of expressing and enforcing morality.” (p. 179).  That is,  Cicero saw rhetoric as tool for philosophy and religion and its promoting, just as Paul and the author of Hebrews and Luke and other NT writers did.  We must banish from our minds the notion that rhetoric was nothing more than mere verbal eloquence or learning to speak well, though that was crucial in an oral culture.  Rhetoric in the age of Cicero and thereafter was not mere “words full of sound and fury…. signifying nothing”.  On the contrary, words were seen as the change agents of society, especially words spoke well, at the right time and in the right manner.

An evangelistic religion like Christianity could only ignore rhetoric at its own peril, if it indeed wanted to persuade the world about Jesus.  What is most interesting here about Cicero is though he was a Westerner, he preferred and was trained on Rhodes and in Asia Minor in  Asiatic rhetoric, and it was the tool he used to build his remarkable career in Rome as both a lawyer and a politician. (pp. 252-54).  It appears that the Romans had more affinity for things eastern, including eastern style rhetoric and religion than some Romans wanted to let on.    Cicero himself, though he once served as an Augur put little faith in the religion of auspices and rea
ding of signs in the sky. His own personal religion was more Stoic in character— all things suffused with a bit of the divine spark, the logos.   The importance of this observation is that within Greco-Roman religion itself, there was considerable push back against the truth and validity of such religion. If even a priest at Delphi named Plutarch could lament, ‘nowadays, few believe the gods are gods’ and  ‘Olympus is now overcrowded’  we may gain a glimpse why there might be a ready reception of Christianity even in Roman colony cities like Philippi and Corinth, and even in Rome.

Everitt sums up his assessment of the significance of Cicero in his own day by saying: “Cicero was a statesman and public servant of outstanding ability. He had administrative skills of a very high order and was the pre-eminent orator of his age, if not of any age. In a society where politicians were also expected to be good soldiers, he was pre-eminently a civilian and this makes his success all the more remarkable.”  (p. 321).  I agree, and more than anything else, his life reveals the supremacy of words well spoken in an oral culture, and the power orators had in such a culture.  It turns out that the foolishness of persuasive preaching was precisely what was needed to start a new world religion in the Greco-Roman world.  Words, especially sacred words, were believed to have inherent power, something Cicero new and modeled better than most anyone.