A Novel Approach to the Reformers– C.J. Sansom’s Mysteries 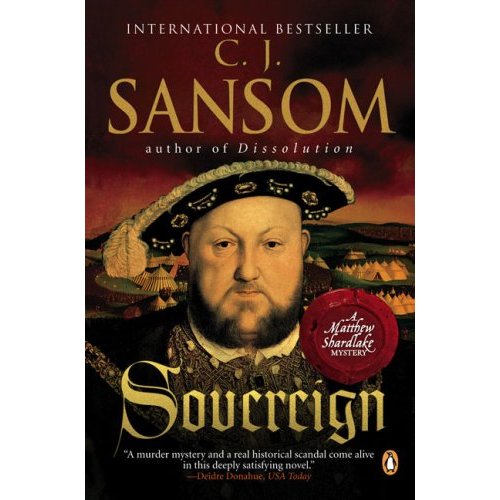 I was hanging out in the airport in Sydney Down Under, waiting for the flight to Auckland, and browsing through the airport bookstore,  when I found the novels of C.J. Sansom, a man after my own heart.  He has a PhD in history from Birmingham,  worked as a lawyer for a while, but gave it all up to be a writer.  You go C.J..

Sansom has in fact written five novels thus far, but four of them, Dissolution, Dark Fire,Sovereign, and Revelation,  all in the Matthew Shardlake series focus on the Cromwellian period of English history (and its aftermath) of the late 1530s early 1540 as Henry the VIII’s reign wound down.

These novels have all emerged in the last five years (2004 to the present) and are available around the globe by various publishers (Pan down under,  Penguin in the U.K. and around here).   If one were to compare these novels to other medieval series, of course they are most like the novels of PC. Doherty.  The real progenitor of these sorts of mysteries however was the late beloved Ellis Peters.  Peters focused on life in a monastery and she tended to avoid the seemier side of things in her descriptions of things. Her prose is the most elegant of those who have written in this genre (some of you may have come across the TV versions of her work— the Brother Cadfael series).

What makes Sansom’s novels stand out is they are written from the perspective of a lawyer. Matthew Shardlake is a man who used to be an ardent Cromwellian Reformer, but becomes disillusioned when he sees all the hideous things the Reformers were party to in the 1537-1543 period, never mind the machinations of Henry the VIII and his multitudinous wives.  Of course not everything Henry did was terrible— he did give us Greensleeves, King’s College in Cambridge, and the chartering of my first publisher Cambridge University Press, the oldest continually operating press in the English speaking world.   But I digress.

The real strength of Sansom’s writing is detailed historical description of the ordinary life of ordinary people in London and the surrounding areas during a tumultuous period in English history.  This was the period of  Cranmer and Cromwell and Coverdale when the memory of Sir Thomas More was still fresh, and those today who care about or are interested in the rise of the English Protestant Reformation under Henry’s instigation will find these novels fascinating. Sansom doesn’t gild the lily at all, and so we are regaled with Reforming preachers who are busy condemning every one to Hell (the so called ‘hot Gospelers’) and people who go on killing sprees, in the name of the Lord (the subject of the novel Revelation where a crazed Reformer uses the seven bowls judgments as a pattern for a series of seven murders).   These were perilous days for Refomers who could be hauled off to jail by Bishop Bonner in a heartbeat for nothing more than preaching the Gospel on a street corner. Needless to say this is not your momma’s Sunday school literature about how pure the Puritans were.

When you read these novels you can certainly understand why, by the beginning of the 18th century when John Wesley was born (1703), England was sick and tired of religous wars and of killing each other in the name of Christ, and so the watchword of the age was ‘tolerance’.  Does that sound familiar?  “Plus change plus la meme chose.”  This is in turn why Wesley’s revival frightened people.  Religious enthusiasm was seen as incendiary and possibly seditious, and England didn’t want to go through more bloodbaths.

One of the most interesting aspects of these Shardlake mysteries, which like all good mysteries, keep you guessing to the end of each novel, is that Sansom does not hesitate to portray the degree to which Christianity played a crucial role in every aspect of life from politics to marriage to trade to the way one dressed.  One gets a real feel for the good and bad of what it would be like to have Christian values and concerns involved at every turn in a particular culture.  Shardlake himself comes across as an increasingly agnostic or less pious  Protestant who is less and less sure it is a good thing for a government to support a particular brand of Christian religion at the expense of others, the major struggle being between the so-called Papists (i.e. Catholics), and various sorts of reforming Protestants who drew their inspiration from Luther and Calvin.

If there is a murder mystery writer to whom Sansom is most indebted other than the ones already mentioned,  it would be P.D. James, as these novels share the dark and dank atmosphere of many of James’ novels (try Original Sin if you have not sampled her work).   Sansom’s powers of description are excellent, but sometimes the novels get bogged down in detail and the plot drags. This is particularly an issue in the longest of these novels, the most recent one entitled Revelation.   Nevertheless, for students of the book of Revelation, this latest novel will prove the most fascinating, for it reveals how earlier eras of Christians read that book  (i.e. the Pope is the antichrist, and Dispensational interpretation is nowhere on the horizon).

For those who like their Protestant history lessons sanitized of the seamier side of things,  these are not novels for you. For example in the novel entitled Dissolution we learn of the destruction of all the monasteries in England under Cromwell’s iron hand, or in the novel entitled Dark Fire  we hear of the prosecution of a young teenage girl (13) for the murder of a boy she did not kill, just because the Bible says a ‘life for a life’.  The judge in the case is what we would call ‘a hanging judge’  based on his ardent belief that Biblical law should be the law of England and be imposed even on children.  We also are regaled with descriptions of ‘impressment’ which makes the torture of waterboarding look like child’s play.

There is much to be learned from these interesting novels, and in a year in which we celebrate the legacy of Calvin, it might be well to also remember the darker side of that legacy– namely the Michael Servetus side of things.  Protestant Geneva was far from Utopia or the kingdom come on earth.  If there is a cautionary lesson in these novels it is this– beware of trying to legislate Christianity, or at least beware of using OT law and the book of Revelation as the basis for civil jurisprudence.   Caveat Emptor.

For Whom Did Christ Die?
archives most recent
More from Beliefnet and our partners
previous posts